We’re baaaaack! Yes, “Desperately Seeking the Exit” is back on US soil after kicking arse at the 2013 Edinburgh Fringe. With great press, sold out houses, special events and a slew of 4-star reviews, it was even better than last year. Whew!

I really didn’t know how EXIT would do in its second round in Edinburgh. After all, this years’ festival was officially the largest Arts festival in the world to date – hosting 45,000 performances of 2,871 shows in 273 venues across the city. Uhm, that is A LOT! But somehow, EXIT managed to find its way and audience. 75% of the 21 performances were standing room only and we often had to turn people away (which is a good problem to have). Most of the attendees were there from word-of-mouth … not only from last year’s run, but from hearing about the London run this past winter. Many people simply stumbled upon it due to the venue I was in with comedy-seekers literally just popping in to check out the show.

The Counting House is a large bar complex made up of four venues, connected to a beer garden and another popular pub. I would gladly return to it, even though I fought with the sounds of the band and clicking bottles in the beer garden below the window of my very hot venue.

It was great to meet up with so many fellow performers from last years’ Fringe, as well as new friends I made in London and at the Adelaide and Brighton Fringes where I performed the show this past year. Everyone is so supportive of each other and we don’t even blink when asked to see the same show again and again because some important reviewer is in the audience that day. I think one of the best things about doing the Fringe, is seeing others’ work. I am almost always moved to tears at the sheer creativity that goes into these kinds of shows. Most shows are an hour long, so I squeezed in about 2-3 shows a day starting at 10AM and going until 2AM. Plus, doing my show every day at 6:15PM. I lost some weight, crediting the “Fringe Diet” and the many hills of Edinburgh. I highly recommend it!

I stayed with my old pals Alan and Victor who live in Edinburgh and treat their guests like hotel guests. The flat is only a 30 minute walk to my venue, but I did learn to master the bus system to save my energy. It was nice to come home to some paella cooking on the stove every so often and I treated them to a proper Yankee BBQ on my last day.

The show received three 4-star reviews and was named Top Five Solo Shows by Fringe Review. I did an interview with the BBC, spoke on a panel about World Fringe festivals (having now participated in five) and learned about the American college touring circuit which is the next phase for EXIT. Not only can I perform the show at these colleges and universities, but I can also teach. And this means an income doing something I love to do. I’m doing the show in Buffalo the weekend of October 18 on the same weekend as the National Association for College Activities is having a big convention. Here I plan to land a booking agent, and it’s also going to be fun to bring the show “back” to Buffalo. I actually did the first workshop/reading of EXIT in Buffalo about 18 months ago! So much has happened since then. Kind of shocking to think that EXIT has now played on three continents in 10 cities in about one year. Oh! And I just added a performance of EXIT in NYC at the Triple Crown on Sunday Oct 13 at 8PM. Pay what you may, as always!

Madonna’s birthday landed on the third weekend of the show, so I threw a spontaneous birthday bash in the middle of the three shows – complete with cake, candles, balloons and streamers that magically appeared; getting 50 people to sing “Happy Birthday” to the Material Girl. If I do EXIT again next year, it will only be for that weekend and will absolutely have a Madge party. There is also talk of showing the DVD of the musical in Edinburgh one night, and a pop-up-drive-in theater where I might show the original film. We will see! 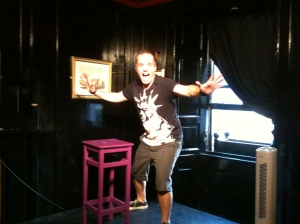 The good news is that EXIT has reinvigorated an interest in the musical Desperately Seeking Susan which my lawyer and I are working hard to get published and licensed by 2014. We hope the show will then be performed by regional theaters, UK tours, colleges and high schools. It has taken a long time to get this far with the musical. Working with pop stars is not easy.

One of the highlights of the Fest for me was the crazy event I created called the Critical Mass Tomato Toss. 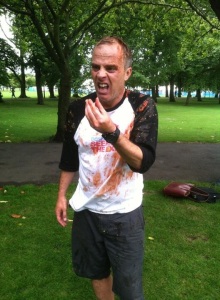 Set up in a large park in Edinburgh, performers who received rotten reviews were encourage to throw rotten tomatoes at the poster-sized faces of 33 critics. It was a hoot! Most of the supplies and printing were donated and we collected money from the roughly 40 onlookers and participants which went to the local homeless charity Streetwork. “Making something good from something bad” was the slogan…and it was a total blast; ending with me dumping a HUGE bucket of tomato-goo over my head (think CARRIE). The event got some great press and will definitely be back next year. And maybe  every year. Ironically, The Scotsman (who gave EXIT a 1-star review last year) asked me to write a piece about the Toss for them!

The 2013 Edinburgh Fringe was one of the highlights of the year, and I cannot wait to go back. I’ve been asked to direct and develop three shows – one from the US and two from London. I’m not sure if I will be doing a new show next year, but there is some talk of Hollywood Nurses (the play I cowrote with Sheila Head) making its way to the Fringe in 2015 direct from Manchester. This. Would. Be. Awesome.

In the meantime, I’m back in NYC working hard on the novel version of the show, which a publisher in London is keen on publishing. I will be running my Edinburgh Fringe Starter Kit workshops this winter to help folks get ready for next summer’s Fringe and I hope to perform the show a few more times in NYC and hopefully get chosen for the Orlando Fringe in May. If you haven’t already “liked” the EXIT Facebook page, please swing by and give it a click. This way you’ll get updates that are a lot shorter than this. To date, over 1,700 people have seen the show on three continents, and we hope to double that this year – alas, one or two continents will suffice. : )

Finally, thank you gentle reader for your support and encouragement these past 18 months. It might be a solo show, but it’s nothing without an audience and readers like you. The tide is high … let’s get into the groove!

This is a guest blog I wrote for What’s On Stage UK. Hope it helps you if you wrote a flop – or plan to. 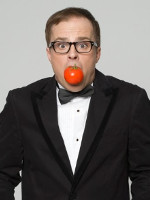 Just finished a 2-week run of the show at the Adelaide Fringe, which is the largest Fringe festival in the Southern hemisphere – hosting over 900 shows from all over the world. It was hot as hell (average temp 103) and the city was bustling with a number of other festivals. Getting the word out seemed easy at first, as I did several radio interviews from the States at the ungodly hour of 6AM (time difference is 27.5 hours ahead in Oz). But getting the word out there was more of a challenge as there was just so much going on in Adelaide. It’s a busy city in the summertime. And did I mention HOT? But such a beautiful part of the world – even if it takes about 28 hours to fly there. Don’t get me started. 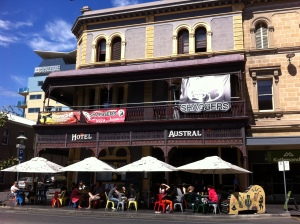 When I arrived at the show’s venue The Austral Hotel, the show posters and flyers were all over the place. Note: A “hotel” in Oz is simply a bar with more than one floor. No one stays there unless they pass out in the bathroom. Which is entirely possible at this very popular bar on the main drag of the city called the Rundle Mall. I thought with all of the foot traffic and posters that EXIT would be packed every night. And it was. For the first 5 nights. Then the 4 & 5 star reviews started coming out, and less people came in. Weird! Sometimes I played for 6 people; sometimes 50. But mostly, under 10. Which was a disappointment. Then when the festival was over, the show was named BEST COMEDY by the big paper there, The Advertiser. WTF?!

I met some amazing artists and saw brilliant work. Every show was a chance to refine the material as I readied EXIT for the next stop – LONDON. I discovered new bits, new moments, and new ways to connect with the audience to keep the show fresh, fun, and conversational. The feedback was fantastic and I am definitely glad I did this festival. But, I doubt I will be coming back to Adelaide. As lovely a city as it is with its Botanical Park and Gardens and rowdy people, the audience for a show about a musical is pretty small there as they don’t really “do” musicals in this part of the world. Maybe that’s a good thing?

The show will be playing at the Leicester Square Theatre in the heart of Theatreland every night for 3.5 weeks starting April 24. On my two “off” nights, I will be doing the show at the Brighton Fringe, which is an hour train ride south of London. It’s sure to be quite a workout – not to mention that I will also be teaching my Flying Solo workshops twice a week at the Actor’s Centre in London. But I am looking forward to being produced (by Kat Portman who picked up the show after seeing it in Edinburgh) and to seeing how it goes over there … and of course seeing all my mates.

I’m also doing a special “Be My Little Britain” performance of the show on April 14 at 7PM at the Triple Crown. At this show, the audience will be transported to London (and become my “Brits”) so I can try out the London version of the show which is somewhat new – opening with a video montage from the musical plus about 10 minutes of new material. Tickets are the usual “pay-what-you-can” and if you cannot make it and would like to support the show with a completely tax-deductible donation, please go to my Fractured Atlas page. Any amount is greatly appreciated and will be thoughtfully utilized as we take this little show to new heights.

The show has not even been running a year and yet it seems like forever – but the good kind of forever! Thanks again for all of your support and encouragement. I  hope to make you proud in the coming months. : )

The Olympics of Performance

Here is an article I wrote for the Pink Paper, which is a gay mag in Scotland. They asked me to do a piece about the Olympics. This is what they got. xo

Welcome to the Exit

Thanks for stopping by, mate. This here is the official blog for Peter Michael Marino’s solo comedy “Desperately Seeking the Exit.” Swing by every so often to follow the journey of this show about the making of a West End musical based on the American movie Desperately Seeking Susan, featuring the music of the American band Blondie, and the shared English language that got in the way. Performances begin in NYC this May in advance of its month-long run at the Edinburgh Festival Fringe this August.

The tide is high, but I’m holding on.